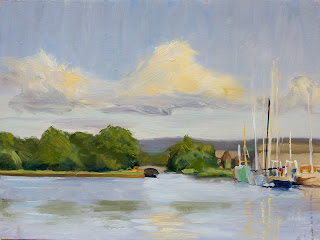 Glasson Basin,  Sunshine
Oil on Board,  9"x12"
Painted on location.
A bit of a contrast with the earlier painting below from the same viewpoint.

Kendal parish Church, Rear Facade
Oil on Board. 12"x15"
Started on location then continued later. It was my birthday a couple of weeks ago and I finally decided to get myself a French easel so I can now paint much bigger boards outdoors. I've got to get used to covering a larger surface in the same amount of time.

This church has the distinction of being the widest parish church in England and dates from the thirteenth century, though it was built on the site of a much earlier church dating back to the eighth century.

Glasson Basin, Overcast
Oil on card,  6"x8"
On location last week.
The weather has been awful this past fortnight or so. This view is looking across the water to the start of the Glasson spur, which links to the Lancaster canal at Galgate. It's a short walk to this location from home and I decided to have a try in between rain showers. It held off long enough to finish this on site. It was painted on a card I'd used previously and wiped off. You can still see some of that earlier painting which created a nice underpainting.
Posted by Paul Murphy at 10:05 No comments: Links to this post

Stone Footbridge near Underbarrow
Oil on card, 8"x10"
I did this one on location after work one evening a few weeks ago and never got round to uploading it. I was looking around for a good location and found this place by chance. It's along a footpath somewhere near Underbarrow and Brigsteer. The path crosses this stream via the very old footbridge which originally would not have had the handrail.
Posted by Paul Murphy at 21:55 No comments: Links to this post 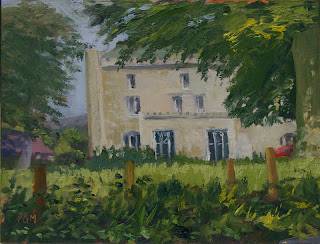 Thurnham Hall
Oil on card, 6"x8"
Done this afternoon on location.
Posted by Paul Murphy at 21:26 No comments: Links to this post

This is me painting in Scotland

I've set up this site as a sort of diary to plot my progress as I continue to paint. I have been inspired along the way by many other artists who are using the internet as a way to share their art with the wider world.
My main focus is in plein air landscape painting and still life. I live in the north of England and am fortunate to be surrounded by a variety of wonderful landscapes.